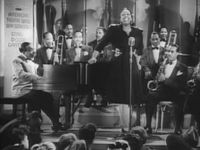 The music of the Swing Era - which gave birth to dances like Lindy Hop - was exciting, and vibrant. It was the underground club music of its day - and it has kept all of its appeal over the decades since, which is one of the reasons why these dances are still so popular today.

We pride ourselves not only on using the music that most suits the dance, but on using the best of the old swing music - the music that kept people dancing for hours on end, for night after night. Legendary artists like Count Basie, Duke Ellington, Jimmie Lunceford, Chick Webb, Louis Armstrong, Artie Shaw, Benny Goodman Cab Calloway are among the nearly endless list of artists who helped make the Swing Era one of the biggest musical revolutions in history.

Andy has been the resident Lindy Jazz DJ since we began in 2007. In that time, he has become a sought-after Swing and Blues DJ both nationally and internationally, having played at huge number of events around Europe - including Chase Festival in Germany, the European Swing Dance Festival, the London Swing Festival, Hullzappoppin’ and Camp Savoy in the UK, Herrang and the Snowball in Sweden, and many others both locally and abroad.

Over the years, Andy has built up a superb collection of music for swing and blues dancing, but what marks him out beyond that is his innate sense of how to play the right track at the right time - to understand the mood of the dancers on the dancefloor, and play music to excite and inspire them, and help them create magical moments in their dancing.

Having a private lesson meant I had a consistent partner and therefore the opportunity to try different approaches to the same move. We were able to discuss what worked better, worse, or just differently.

Appreciating common "ideas" like triple step, pulse, stretch, kick down, and beginning to feel comfortable with them helped by allowing me to focus on other ideas, whilst maintaining communication with my partner.

I now have a better understanding that communication between dance partners improves with a good connection. Non-visual communication adds to the dance and is something that watching a demonstration can’t teach; I don’t get it until I feel it.

It’s fun to dance with the teacher; they love dancing too.

Just a note to say thanks to you and your dancers for Friday night - all the feedback tells me it was rockin' in there!

Lisa VickersEvents and Communications Manager, Women Into the Network (WIN)

Woodhorn booked Lindy-Jazz to perform on August Bank Holiday Monday as our major exhibition at the time was about Northumberland during WWII. The period music and dancing displays brought the exhibition theme and the museum site to life in a fun, friendly and accessible way. Lindy-Jazz were very professional to work with, and I would recommend them wholeheartedly. We were particularly impressed with how the group engaged with our visitors, spending time chatting with them about the music and dancing alongside their impressive performances.

I would like to thank you and Andy for your wonderful presentation of the Lindy Hop Blues dance at our Equality Awards on Friday. The dance, which was beautifully executed, lent atmosphere to the occasion and was extremely well received.  I would certainly be more than pleased to recommend you for any such event, thank you again.

Many many thanks to you and Andy for running such a superb day and night of events!  I know that those participating really enjoyed themselves and I have had a lot of good comments about the Friday night.   I appreciated all your efficient management of everything and hope that we can work together again.

Having danced for a year now, I find that Lindy Jazz beginner lessons are still useful due to their emphasis on technique, which can always be improved by dancers of any level. Lindy Jazz is unique in its beginner lesson content, which inspires people to be creative.  Rather than giving a set routine of moves, they teach a strong foundation of moves and encourage people to use them in any order, and to go further by coming up with their own variations. This ensures that all dances are kept fun and interesting for both leads and follows.

I would undoubtedly recommend a private lesson with Joo-Lee due to her in-depth focus on fundamental technique, which underpins everything about lindy hop. The advice I was given has long since stuck with me and I have seen a marked improvement in my dancing abilities since.

As always, Lindy Jazz are always a pleasure to work with. It's always impressive to see how organised the operation is - a well oiled machine. It was especially good seeing how the tempo of the evening was kept at a great pace, the atmosphere was held throughout and the hosting skills were impeccable - genuinely impressive stuff.